Born to drug-addicted parents and put to bed in a closet, Amey entered the foster care system at the age of five and was adopted at eight, only to be “returned” to foster care at 13.

This California girl definitely didn’t have the sand and surf upbringing of many.

Born to drug-addicted parents and put to bed in a closet, Amey entered the foster care system at the age of five and was adopted at eight, only to be “returned” to foster care at 13. Spending her teen years “locked away in a prison for kids,” Amey was an angry child. She felt unloved and struck out at everyone around her.

“I basically raised myself,” she explains. “They emancipated me at 17 [from the California Youth Authority]. I got an apartment and a job in a department store. I was going to show the world I could be an adult.”

Amey’s new, adult life involved becoming pregnant and marrying an older man she knew through the foster care system, thinking he’d understand her feelings. But that was not to be. Instead, he abused her and introduced her to heroin, on which she got hooked.  “I liked it because it took all my pain [away]; but it gave me more pain than anything!”

After eight years in an abusive marriage, a new sense of determination emerged. “I looked at myself and looked like death,” she remembers. “I kicked him out, went to a women’s shelter and then moved four towns away. I went to Fresno State and started nursing school.”

Life was not all smooth sailing, yet she was progressing. Amey married again and had children, moving her young offspring to West Virginia when that relationship ended. In 2017, she moved to Orlando to build a bond with her son Jordan, whom she’d had to give up at birth. Though her intentions were good, the money ran out and life went downhill. “I was homeless and started to drink. I had nowhere to turn.”

Amey “ended up at Lakeside,” now Aspire Behavioral Health, and was referred to their Anchor Program at Pathlight HOME’s Maxwell Terrace Apartments. She can’t say enough about the support she received from Anchor’s Director, Reuben Butler, throughout her daily trials and brain surgery in September 2018. She graduated Anchor in October 2018 with a positive outlook and in a relationship, moving into an affordable Maxwell Terrace unit in the heart of her support system.

“Because I went through Anchor and lived here, it opened doors for me,” says Amey. “I tried to get back in the game and reconnect my brain [after surgery], but couldn’t do it. Then I saw a flier for the Pathlight Kitchen Culinary Training Program.” 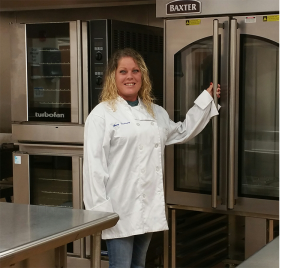 After applying, Amey let her guard down, realizing this was what she needed to connect with the abilities she thought were lost and the type of relationships she never had. As the weeks went by, “We became a family." Then, a knock at her apartment door, with Syr Rodriguez offering case management services through Pathlight HOME’s Community Services Program, was the icing on her cake. She now had extra support in her new journey.

Having recently graduated from the culinary program, Amey’s excitement about all she learned at the hands of Chef Esteban and Shannelle is palpable. “They care about us! They brought my passion back for life. There’s beauty in every single thing! You get hands-on cooking…knife skills…fish [preparation].  It was an adventure…every day there was something new. Chef brings it to life!”

Amey was also thrilled with the business skills she mastered and has considered pursuing an AA in business to help with her goals. “I want to do bakery and catering; I’d like to do dinner parties.”

Until January 2020, Amey had been employing her culinary talents at Lucky’s Market. She was promoted quickly and received compliments galore from her boss. Lucky’s untimely closing in Orlando coalesced with Amey’s decision to dissolve her relationship, which had become unhealthy, and to support her son in Ohio through a medical emergency. ”It was the perfect time to move on,” she said about grabbing her belongings and moving to cold Ohio. She’s planning to live there for the foreseeable future and, with her passion, cooking skills and goals, has already landed a new position. “I brought my culinary materials with me and have hit the ground running!”

Last and certainly not least in Amey’s new life is the renewed relationships with her children. “It’s here if you want it,” she says. “I’m 46 years old and just now getting it together. I wasn’t the best person either. Where I come from keeps me from going back there. This is for me…I wanted to reconnect my life…With love and support, so much more happened!”