“If it happened to me, it can happen to anyone,” says James as he recounts his story. “Just because I was homeless doesn’t mean I wasn’t a successful individual at some point.”

"If it happened to me, it can happen to anyone,” says James as he recounts his story.

“Just because I was homeless doesn’t mean I wasn’t a successful individual at some point.”

He was raised in a middle-class Connecticut home, with working parents and four sisters and brothers. When he was 17, his dad’s job took the family to Texas.  “It was a major culture shock,” he reminisces about the environment. Even so, “I did okay, made friends and graduated high school in 1978.”

“I went to work for US Steel Corporation and got into computers,” he says about the beginning of his Information Technology career. When the plant closed in 1987, he returned to Connecticut, lived in his grandparents’ house, and worked in the IT Department of Bob’s, a local retail chain.

Life was good. James got married, had a daughter, was hired by Lockheed Martin and was outsourced back to Bob’s. In 1998, Lockheed gave him the opportunity to work in Orlando. He jumped on it, sold his house, moved the family to Central Florida and built a nice home in a golf course community.

“I felt very good…working for a prestigious company…I couldn’t ask for a better job. I was making almost $100,000 per year. I was still learning…still getting better at what I do.”

“I was living the dream,” he expounds. “A condo in Cocoa…boats, motorcycles, cars, a truck…all that stuff. I’ve always been a bit of a partier…a drinker…but I started drinking too much.” And then James got a DUI. “It was the start of the end of my marriage. We began to have marital problems and I moved out and into the condo in Cocoa.” 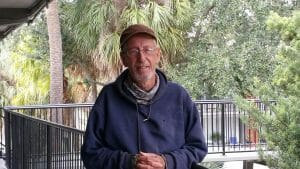 That’s when James’ dream life took a giant leap downhill.  In short order, he got another DUI, was put on probation for alluding law enforcement and sentenced to wear an alcohol ankle monitor, and was laid-off from his job. His wife – who had let him move back into their home - packed his bags and filed for divorce after he was wrongly arrested for violating probation by drinking alcohol. Even with a lawyer, that mistaken happening cost him five weeks in jail.

“I was livid,” says James. “Because my wife kicked me out for something I didn’t do.” He reacted by drinking in earnest, driving drunk on a suspended license, and taking drugs. “If I’m going to go out…I’m going out in a blaze of glory,” he rationalized. His “glory” resulted in six months in the county jail, followed by living in a motel on his 401K, and then a year in prison. Back surgery while in prison left him with health issues; and his divorce left him with the truck, his Harley, what was left of the 401K, and little else.

Running out of money, he moved to Tampa to stay with his “toxic” sister, and then Orlando, Texas, Mississippi and Pensacola in short order to stay with friends, storing his meager belongings in Mississippi. His sister sold the truck, so he traded his Harley for a car, moved back to Tampa and then Orlando. In 2016, he started working day labor in Sanford and then landed a job.

Still drinking, James slept in his car behind Walmart until he got arrested for driving on a suspended license. “They impounded my car with my stuff in it. I lost it all!” Yet, something in James wanted to survive. He was given a tent, set it up in the woods, got a bicycle and kept going to work. “Living in the woods was hell…I started to try to come back. That shows some tenacity!”

His health wasn’t as tenacious, though. A heart attack and seizures landed him in the hospital and back in the woods with prescriptions he couldn’t afford to fill. Thankfully, he had also been given the number for the Hope Team, a program of the Health Care Center for the Homeless. He called and “started a relationship” with them in June 2018.

“They didn’t let go of me. I did everything they told me to do….got glasses…got my ID back. They suggested shelter, but I said ‘no.’ I knew permanent housing was an option, but I wasn’t ready.” Another heart attack, additional seizures, and a renewed relationship with his daughter finally changed his tune and he applied for housing. He moved into Maxwell Terrace Restore Program in November 2019.

“This has been a salvation for me. It changed my life. I have a roof over my head. I started working with Audrey Sandford [his case manager]… acquired things…I’ve got furniture! I pretty much stopped drinking.”

“The relationship with my daughter is [continuing] through email. I’ve re-established friendships. I go to lunch. When I was in the woods, I had reasons to be depressed…don’t feel that way anymore. This came along just before the cold hit…just at the right time. There’s definitely more hope. I’m working on how to get back on my feet financially. I still have to take things one day at a time. I just met with a lawyer and am filing an appeal. Then, I’ll be eligible for retirement.”

James can’t praise Audrey and her team enough. “They are absolutely wonderful! They’ve been a great support…for my current situation. Between me moving in here and having a relationship with the Restore Program, my outlook as far as overcoming my addiction…this whole thing has become a Godsend…the timing of me coming here was a gift from God, cause I wasn’t going to make it. But I’m still here!”

And how does James sum up his story? “I went from king of the hill to the bottom of dirt. Now, I see some future even if I don’t know what it is yet. It’s a hell of a lot better looking out my door than looking out of a tent…so there is HOPE! 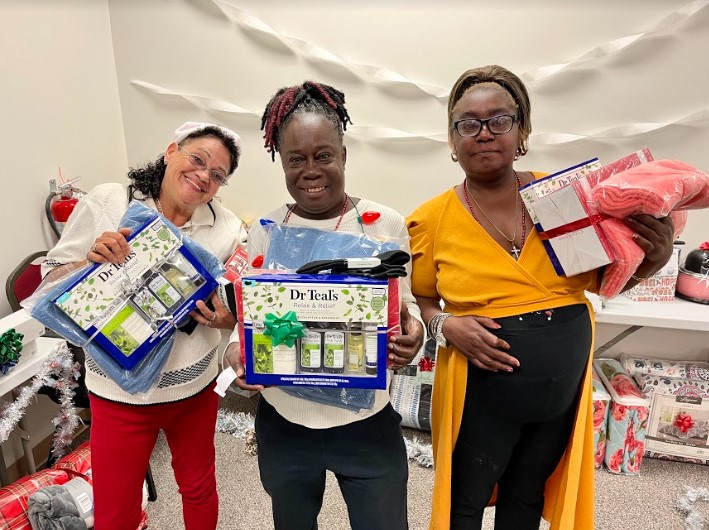 An Opportunity to Grow!

It’s a Pathway to Life!

Empowering the Faith to Trust

Karen Bono Special to the Sentinel

One big step toward a home for the homeless